Marrakech Through My Eyes and Keyboard

I can only describe our days in Marrakech with some sort of stream of consciousness typing. I feel like any attempt at orderly documentation would go against our experience in this city. So in that light…

“Moroccan whiskey.” Initially too sweet for my taste, but it grew on me and became the perfect dessert or afternoon treat. Served in tiny glasses with ornate silver bases, poured with the kettle two feet above the cup by whoever was serving. (Later in the trip we saw the huge blocks of sugar they put in this tea and it became less appealing!).

Case in point to Moroccans’ love for sugar, here’s a tiny coffee I ordered that came with five sugar cubes. I used 1/3rd of one: 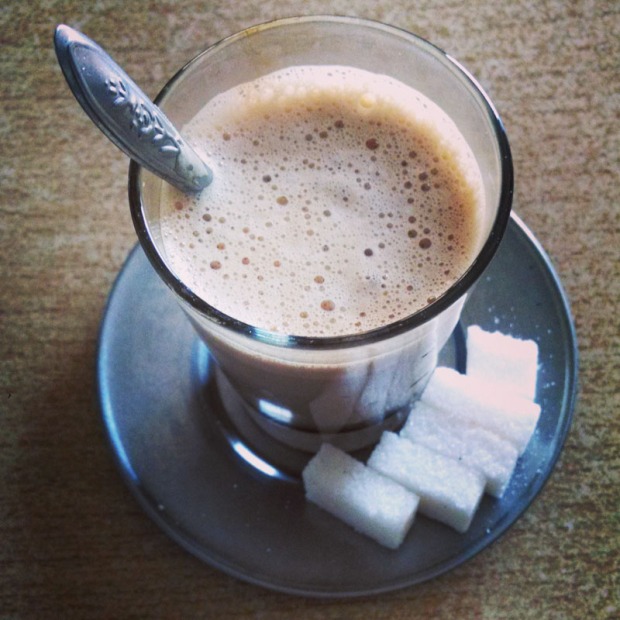 The main square – Jamaa El Fna – ended up being a perfect spot for having a foot in and a foot out of the fray. The food vendors, music performers, snake charmers, plant sellers, spice pushers, tourists with cameras out, and kids selling packs of Kleenex (Morocco’s version of Mexico’s Chiclet apparently) – all are tumbling about in the mix of the square at all hours of the day.

But the rooftop terraces surrounding the Jamaa provided a refuge from the chaos where we could sit and eat Moroccan salad, sip a coffee and watch it all happening below while recuperating from a day of walking the medina: 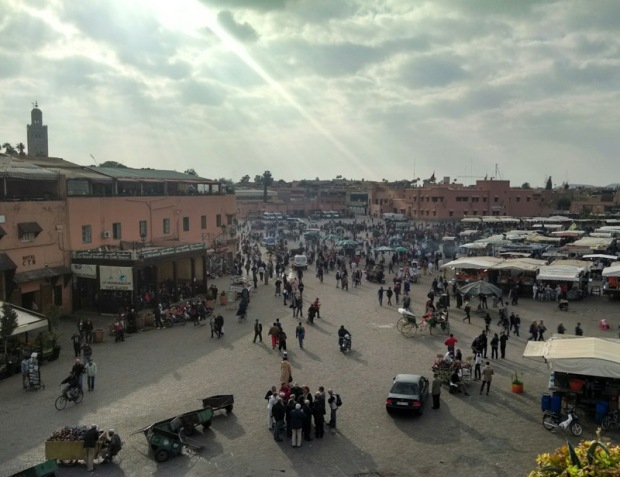 My mom commented one afternoon that it looked like an old painting in action, and she was right – it’s a scene of small figurines doing their daily routines with faces nondescript in the hazy light of afternoon sun. And like an observer of a painting, you can imagine the smells and the sounds of the scene, but are removed from the actuality of it.

An amazing “chef’s choice menu” restaurant down a set of windy streets (ok, what in Marrakech isn’t located in such a place?) with a roof open to the stars and tables covered in rose petals. There is no menu, you just sit and are served what they bring you. 1) wine 2) olives and bread 3) Moroccan salad (12 small plates with different vegetable concoctions) 4) chicken tajine (baked in a clay pot) 5) lamb tajine 6) baked pear 7) almond crisp 8) coffee 9) I have honestly never been so full in my life.

My mom at Stage #3 – the Moroccan Salad: 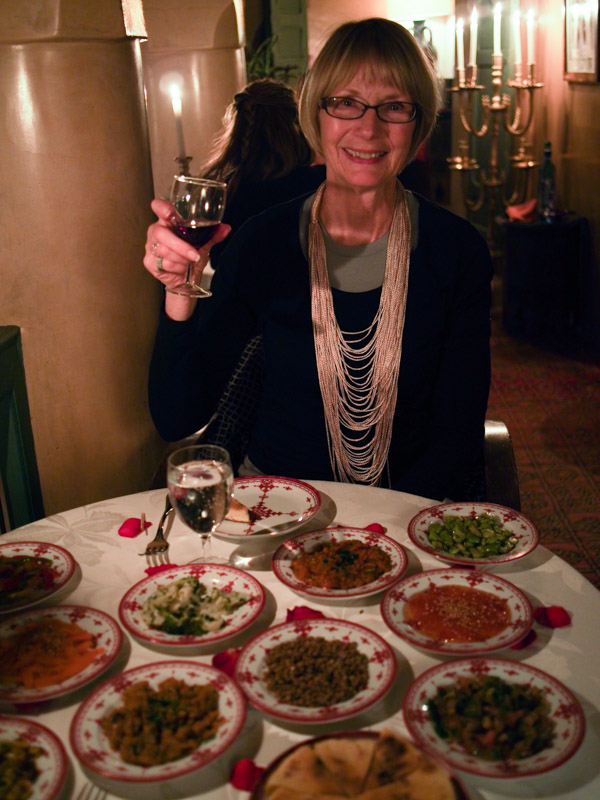 Funny story: When our waiter first mentioned what was coming – “You will be having chicken and lamb tajine,” I heard it as he said it but my mom heard “chicken and lemon tajine”. So once we got to the chicken course I said “Wow I can’t believe we’re having lamb after this!” and she replies “Oh? No, I think he said chicken and lemon.” “Ok that makes more sense.” and we proceeded to eat every single morsel of chicken off that plate.

Well ten minutes later they arrive with two more large plates and spoons and my mom says, “Those don’t look like dessert plates!” … because they weren’t. We had another tajine coming full of sizzling, fall-apart-at-the-touch-of-a-fork lamb. Which of course we ate as well because who could say no?

We must have walked miles every day just trying to get back on course. We would get lost often (at least four times a day!) and sometime seriously out of the way, but never minded since “getting lost” would always bring us upon something new to see.

Google Maps gets the accuracy award for our trip, I can’t believe how well they have those medina streets mapped!!

Of course ice cream is pretty much always awesome but I think the best ice cream experiences are the ones when you aren’t even looking for ice cream but the shop appears at just the right time, when your body  needs it but before your brain realizes it.

This happened twice in Marrakech – once at the posh Hotel La Mamounia where we were walking the enormous gardens (where Winston Churchill used to hang out and paint) and popped into this small isolated building that ended up selling ice cream served in the best thin and crispy cones ever.

See, just look at how happy my mom is: 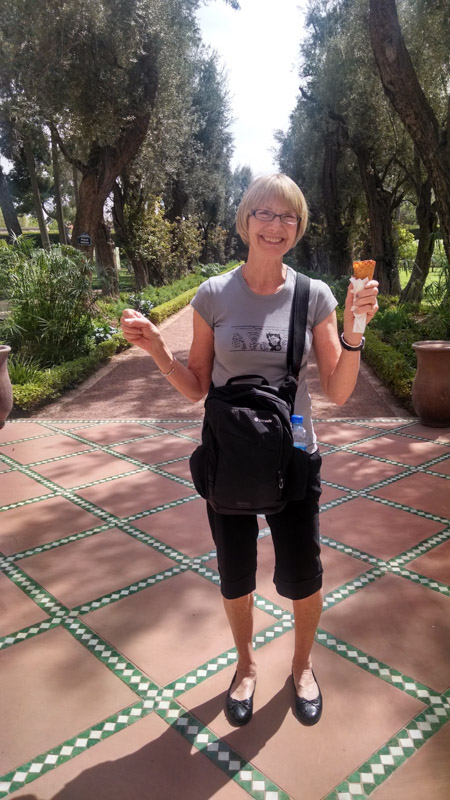 The second experience was outside the medina walls on a main city street. We were walking back from Marjorelle Gardens in the blazing heat and passed a frozen yogurt place where the yogurt turned out to be tart plain flavor, my FAVORITE.

I like to give credit where credit is due and this joint kept us from passing out flat on the sidewalk. One week later into the trip and my mom and I were still talking about this dessert stop!

The Passing of Years:

Palais de La Bahia and Palais El Badii are right next to each other but a world apart. I liked them both. Bahia is a smaller, ornate place with beautifully tiled floors and walls, intricately carved plaster, and narrow painted wood beams along the ceiling. You can feel the decadence of the place. 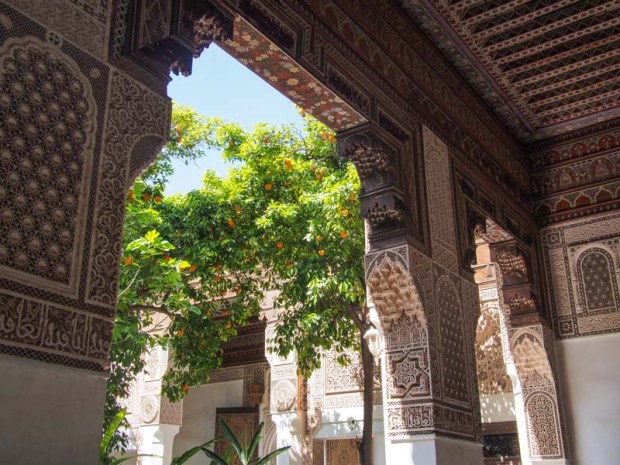 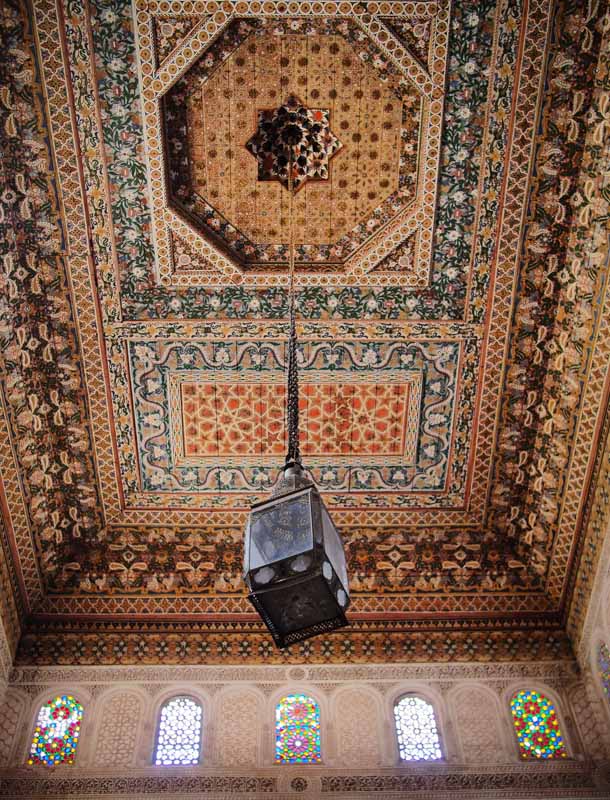 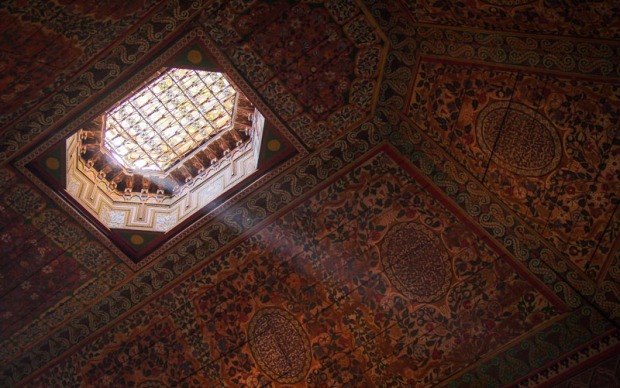 Badii in contrast is an expansive set of ruins, more like a property than simply a palace. Maybe if it were fully restored like the Bahia Palace it would have more of the glitzy feel, but as it is now it’s this beautiful open space where your imagination can fill in the gaps of what used to be. Tunnels, old tiles, sunken gardens filled with fruit trees, and crumbling walls all create a pleasing melancholic feeling. 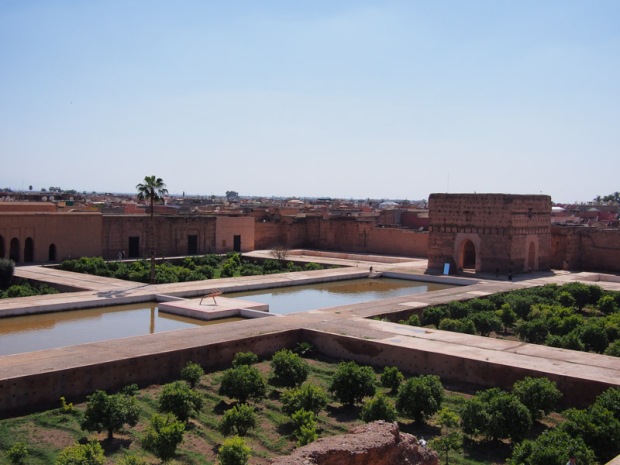 Stork nest at the top, woman reading her book below, both surrounded by history: 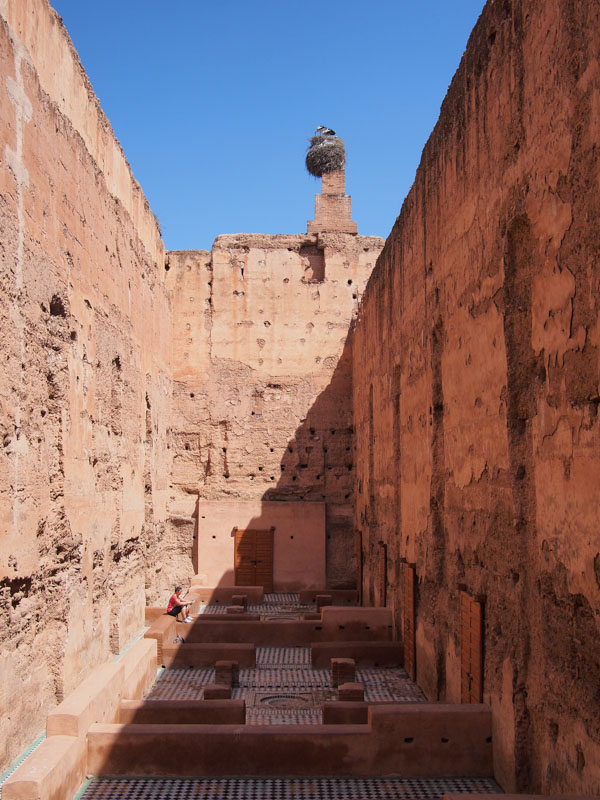 I found my camouflage: 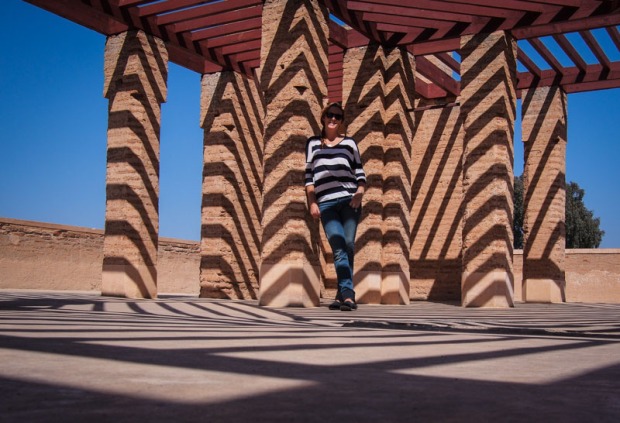 Places like this always make me get a little dramatic, thinking of what was but will never be again (meaning the broader sense of time passing and that I live in this single time period and will never know others except through touring ruins). Like I said, dramatic.

One thing I notice about most every country I travel to outside the US is how small and local shops are compared to home. There are 10 patisseries in one neighborhood here, all owned by families. Such density would never survive back in Seattle.

Every small space here in the city is taken by someone being industrious, whether carving wood, making shoes, selling crepes, or making argan oil. And for each type of industry there were tenfold people making/selling/working the same items. Rather than one-stop shopping it’s 40-stop browsing and pick a place to buy what you want! I like that.

In Argentina, I remember walking out from my friend’s front door (living in a neighborhood outside Buenos Aires) there were two heladerías, one on each corner (dangerous because whichever way I walked I passed an ice cream shop*). And both were always busy! And both served small portions for a small price. It’s just the antithesis of what businesses are driven to do in the States.

I don’t know my point here really, it’s just something I always notice and it makes me wish we were a little less massive convenience store driven in the US. (Funny enough, I just saw this post today about NYC gentrification through photos.)

* I realize I’m talking a lot about ice cream which is weird because I don’t even love ice cream that much, with exception of Molly Moon Salted Caramel which honest to God I have had dreams about. Twice.

Great place to go for a glass of wine and appetizers in the evening, just off the Jamaa. Sit in the large courtyard under the stars and relax after the long day. That glass of wine was so absolutely delicious! We ordered Moroccan salad here to share and were treated with a wonderful assortment of dishes to try. Mmmm dried chickpeas. Oh and I loved their star tables: 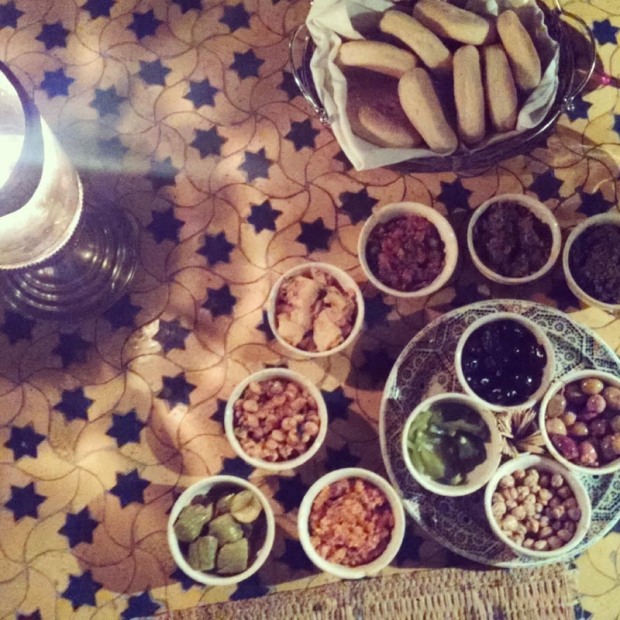 I’ve learned I don’t enjoy bartering!! I’ll do it, but only if I have the energy for it. It makes the introverted part of me start whimpering inside and then collapse into my shoes with exhaustion. I do much better in cultures where you tell me what you think the fair price is for this including your profit, and I’ll see if that works for me or not. Negotiating a bit is fine but when you are starting at 300% or 400% over what other people say I “should” be paying, it’s too much! It’s part of the culture here, I’m just not good at it.

“I think we should get henna tattoos while we’re here.”

So we found a place that used all natural henna to try our first tattoo. Up on a rooftop terrace we drank some tea and picked out our patterns.

The tattoo artist was an older lady with a quick hand and a flair for interpreting the design she was following (i.e. improvising). Ours ended up not showing very darkly on our skin, maybe we have to skip the all-natural dye to get the darker effect. I like mine but would like to try again as well. The experience though was worth it! Tattoos with mom, never thought I’d see the day… 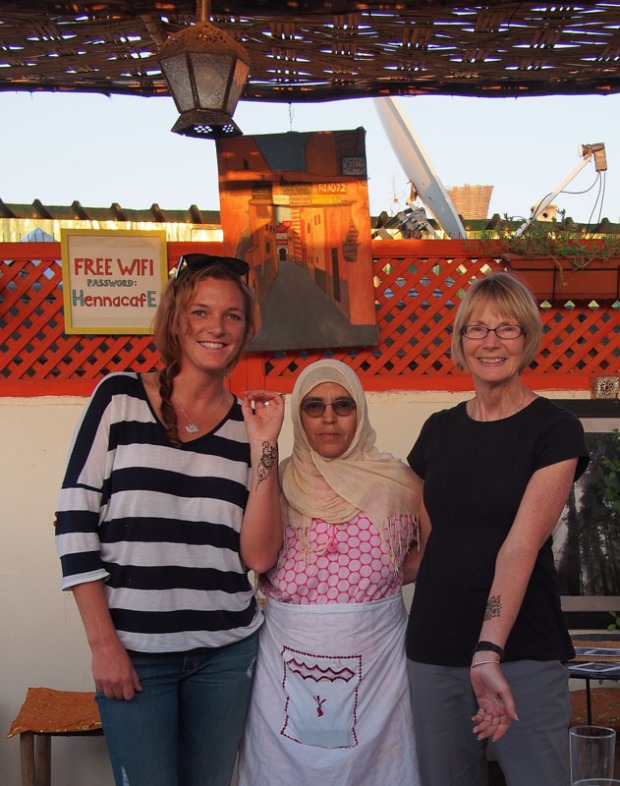 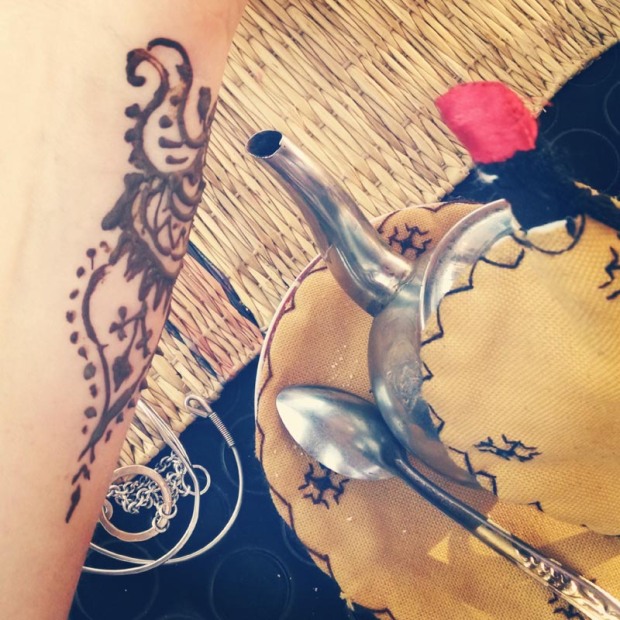 My henna tattoo and Moroccan tea

Reflection of the Medersa (Islamic school) in the pond

Poor donkey … he could use a bath

Haha the Berber Musician sneaked up on mom

Dinner at Torbil under an open roof

Another one zips by

Storks and their huge nests!

What’s this mirror for?

Loving the colors and patterns of everything

Reflections at the Palais Bahia

Wow. (looking up at an archway and ceiling)

Lipstick – can’t remember what the name of the material is that stains the lips though.

My favorite salad bought at the Jamaa market 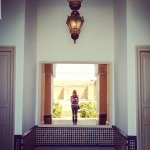 2 thoughts on “Marrakech Through My Eyes and Keyboard”