Many many people I know travel, but there are so many different ways to do it –

My point is that there are a thousand ways of traveling and based on how many people ask me what it’s like to travel alone the way I do, it seems like to some my trips are big black holes of “I know she’s in Chile but beyond that who knows”.

In that light, I had one day in middle Patagonia Chile that I thought would be the perfect microcosm example of my traveling experience. It has triumphs and despair, fresh cherries and evasive trout, sunshine and downpours, and many connections made along the way.

I had a contact (friend of friend) who lived in Puerto Bertrand (VIEW ON MAP), just 30km from where I was camping in Puerto Guadal. I had emailed with him prior and the plan was to make my way there to meet him, see town, do some fly fishing. Of course, no busses ran that route on the day I wanted to go, so I tried to figure another way. This is a luxury of longer traveling – you can spend a day just trying to wing it. Who knew 30km would turn into such a trek!

After finishing breakfast I opened the door to offer some unused vegetables that I didn’t want to carry with me to another couple that had arrived the previous night. Turns out they were leaving this morning as well and were heading by car towards the Carrera Austral. Lucky moment #1 – that’s where I was headed! I raced to break down my tent and pack up then we all introduced ourselves as we figured a way to cram a third person into their tiny rental car. On the way I mentioned I might be heading to Garmisch in April – they laughed, “we live just a few k from there! Give us your email and we can connect when you’re there.” Amazing.

Mom/Dad, if you don’t want to read about hitch-hiking maybe skip to the bottom of this story. For the record I don’t hitch-hike alone ever, just in this part of the country it’s a common and from all reports safe-ish thing to do since busses are infrequent. Ok with that said…

Once we hit the Carrera Austral, they are heading north and me south so we say our goodbyes and they leave me at a bus stop at the road junction (fyi bus stop = shack). I proceeded to wait 2.5 hours, barely any cars passing and those that did not paying me any mind. This was one of those “despair” moments mentioned above. I was too far from any one town to walk easily, so there I stood.

Almost three hours in, two girls were dropped off by a truck; they had hitched from Chile Chico. Turns out one of the girls is from Portland, Oregon, so we chatted about home for a bit. Their truck driver had given them a kilo of fresh cherries which they shared willingly. In return I gave them some of the garden greens from the last hostel.

After some talk of travel and plans, it came up that I was heading to Spain in April sometime, and that Lisa from PDX had a boyfriend waiting for her back there, they met while she was traveling and she was planning on going back this spring since he was a farmer there and not easily moving to Oregon. “We’ll be on his farm outside Barcelona, take my email and look me up when you’re there!” I’m telling you you can’t plan this stuff.

After 3.5 hours of waiting I decided to start walking, thinking people might be more inclined to pick me up if I were trudging along rather that sitting cozily under the bus casita roof. So off I go, up the road….and of course it starts to rain. For the next 30 minutes I walk mainly uphill, both overheating and getting doused by rain at the same time. This was a high point of the day (note sarcasm). Two cars fly by. Finally the third car to go by stops! Praise the gods of the road.

Connection #3: Chileans from Patagonia (the brand)

The two guys who stop have plenty of room, get me into the backseat where it’s dry. Turns out they are from Santiago and are heading to Parque Patagonia for a few days. Ignacio works for Chile Patagonia in Santiago and is heading to check out the park that is the latest conservation project from Conservacion Patagonia. After talking a bit, we even have a connection in common, my friend Rodrigo in Santiago. What are the odds? I would guess low except Rodrigo seems to know everyone in this country.

The other guy is Thomas, founder of Karün Shades, handcrafted wooden frame sunglasses, made locally and from native wood. Very very nice product, and quite fortuitous timing since a girl stepped on my sunglasses the day prior in the bus.

We arrive in Puerto Bertrand in record time and I offer to treat the guys to a beer if they’re not in a hurry. Turns out they have beer in the truck so my slightly frustrating hitch-hiking attempt ends with a ride, a beer, two business cards and some nice conversation about the local area. I’d say it’s a win! I wish I had taken photos of these moments, but I was just happy to be there.

From here I go to a local shop where Rocio from my last hostel said the owner might be able to help me find my contact in the town. I meet Cristian who works there, he is very nice and let’s me stash my backpack while I set off up the hill to find this guy’s house.

I’d been emailing with him a bit about doing some fly fishing which I haven’t done before, and he said to come on by there was plenty of fishing in town. I find his house and ring the bell. At this point I’ve been in the rain for quite some time and it’s starting to soak in a bit, I’m looking forward to finally being here! He comes out, says hello, but doesn’t welcome me in out of the rain. We stand outside talking for a bit, he says he isn’t the best person to talk to about fishing in the area and I should talk to Cristian.

I get the feeling that he’s not too interested in meeting me and I am definitely wet now so I excuse myself to go find a hostel for the night. We say goodbye and that’s that, I walked away feeling a bit dejected! I had come to the town mainly because I’d had this contact there, and from his email I thought he sounded wiling to give some info about local things to do, but then to not be invited in out of the rain made me feel like – why did I work so hard today to get here?! Just a moment of when expectations don’t match up with reality, which happens a lot on the road and you just move on. As a traveler, too, I know that my expectations of people being welcoming are high, just because it’s amazingly the norm. It’s rare to meet someone who doesn’t want to bring you into the fold, but this was a reminder that it happens.

So move on I did – to El Hospedaje de Doña Ester! Found a room for CP$10,000 with breakfast (USD$20). The kitchen is so warm and cozy. I cook some late lunch (by this point it’s 5pm) and chat with Ester and a friend who is over for lunch. It’s all in Spanish and I’m having one of those moments when I can actually converse well in Spanish, her friend even complements me on how well I speak!  After sharing a bit of wine and enjoying lunch, Doña Ester asks if I’d like to move to this other room that I could have to myself for the same price, rather than being in the shared room since the dorms are bound to fill up. Never hurts being friendly with the owners I suppose! Here is Doña Ester herself: 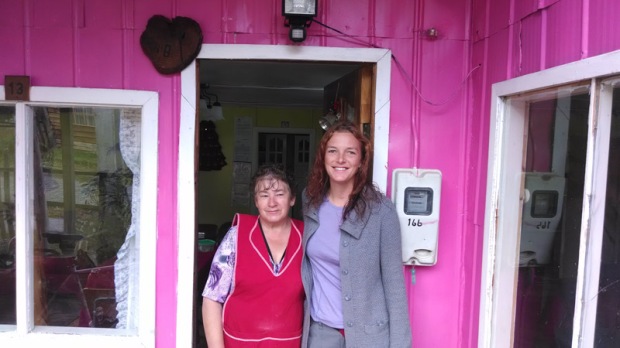 When I stashed my bag I had asked Cristian about fly fishing in the area, thinking about doing a guided trip tomorrow. He says – “Si! Podemos ir al Rio Baker mas tarde si quieres?” We can go later today if you’d like?…umm sure! So we made a plan to meet at the shop at 7. Honestly, I was so wet and tired from the day’s course of events that I wanted to bail. But then I started thinking about how I’d wanted to come here to explore the river and have this opportunity from a local, you can’t take that for granted! So I decided to muster up the energy and carry on with the plan and I am so glad I did.

We head to the shore of the Rio Baker which is coursing with rich blue/green water. He has fishing lines artesenal style, meaning a tube with a handle, and line wrapped around it. Swing the hook end around a few times then let ‘er fly! So fun. We fished for trout for about an hour with no luck but I was still loving the moment. 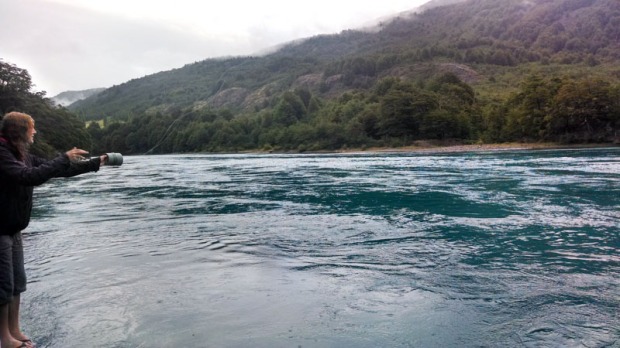 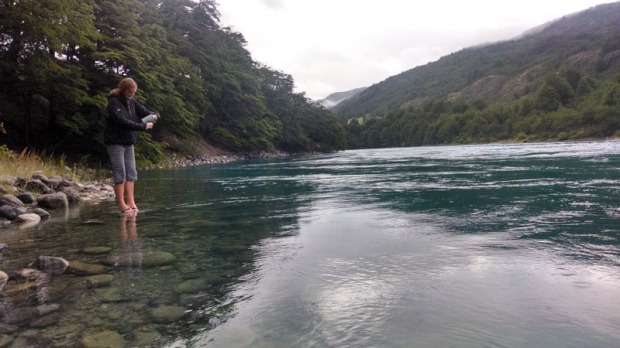 I mention a spot called La Confluencia and he says he can drive us there it’s just a bit down the road. While we are driving the clouds break and the sun pops up to reveal some of the most beautiful lighting of my trip thus far.

The hills are a bright green, the dry brush a golden yellow, and the water a deep turquoise. La Confluencia is the meeting of the Rio Baker and the Rio Nef, which creates a set of wild rapids with two big drops. It’s gorgeous. The water looks so lush, round and full.

He says the best of the best can kayak it but he never has. From here the rivers join and head to Tortel where they empty into the Pacific. After taking in the full glow of the golden hour on the water, we head back to town. I am exhausted!

Who knew that the day would end up like this after starting with a 4 hour wait for a ride I wasn’t even sure I would get! In the end I went fishing with flies in Patagonia and watched the sun set where two rivers meet, then settled in for the night at my cozy Hospedaje spot. Along the way I made connections with people across Europe and South America who I have a good chance of seeing again. I also got caught in multiple downpours and had to walk a couple miles fully loaded with all my gear in wet flipflops.

This was just 24 hours of my two months. Not every day is like this but many are in some form or another! If the above sounds appealing then maybe some free spirited solo travel is for you! If it sounds miserable, well then……